My favorite hotel in Graz is... 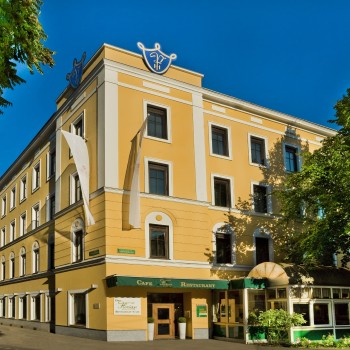 Do you know Graz?

The state capital of Styria attracts visitors who want to enjoy the southern charm of the area, as well as artists and art lovers, who value the former cultural capital of Europe for its many museums, historical buildings, and a lively festival scene. Numerous highlights, some historical and some more unusual, await you in this city on the Mur river, formerly home to the Habsburg dynasty.

As a UNESCO World Heritage site since 1999, the historic downtown of Graz enchants guests with countless delightful streets and squares in a variety of architectural styles. The clock tower of the Schlossburg is one of the city’s most striking features, and looks over the downtown area. Enjoy a wonderful view of the city from above as you get an up-close look at this square tower from the 13th century. From this perspective, you’ll notice how unique the clock’s face is, with hands whose sizes have been reversed. Graz Cathedral is also a popular attraction, one of the most important buildings in Styria. The Cathedral dates back to the 15th century, and once served as the court church of the Holy Roman Empire. The artistically decorated interior impresses visitors with its late gothic frescoes, a splendid Baroque altar, and two sumptuous shrines from the early Renaissance.

We recommend taking an excursion from downtown to the Dom im Berg, whose over six kilometer long tunnel system from the Second World War today serves as an event location for a variety of shows and cultural happenings. Check out the diverse events held there during your short vacation in Graz.

City stroll with a southern flair

The Herrengasse, a lively pedestrian and shopping area, stretches between Jakominiplatz and Hauptplatz. Besides numerous stores, restaurants, cafés, and open-air restaurants, the area is also home to many historic attractions. Marvel at the arcade court of the Landhaus in Renaissance style, which today houses the Styrian Armory, the Gemalte Haus (Painted house), and the Graz parish church. The adjacent Hauptplatz is dominated by Graz Town Hall, which has a castle-like design

Graz became Austria’s first European Cultural Capital in 2003. Some of the attractions built that year still enrich the city landscape, such as the Graz Art House, dubbed the “friendly alien,” which has a futuristic design that’s hard to miss. The museum displays innovative exhibits of modern art and photography. As the City of Design in 2011, Graz solidified its reputation as one of the most dynamic creative locations in Europe. This is clear from the city’s lively urban culture, which finds expressions in modern architecture, innovative shops, art, and design in public spaces, and unique festivals. You should also visit one or two of Graz’s excellent museums, such as the GrazMuseum with exhibits on the history and culture of Graz, majestic Eggenberg Castle, or the Künstlerhaus Graz on the Burgring.

Be our guest at PrivateCityHotels. Graz

Look forward to an exciting sightseeing excursion to the city of Graz, and treat yourself to a stay with your hosts at our PrivateCityHotels. Each of our privately owned hotels has its own unique personality. Book your vacation in Graz in a PrivateCityHotel. of your choice, or select one of our hotels in Austria, Germany, or Switzerland.
Looking for the right gift? Give a vacation, redeemable in 18 European cities at over 60 hotels, as a gift or just to say thanks. Convenient online ordering through our gift certificate shop.